Women, Power, & A Breakfast That’ll Knock Your Socks Off

What is it about “those” women and power trips?

You know exactly the type of woman I’m talking about. The type of woman that makes us look at our close girlfriends and say, “She’s one of those”. There’s usually one on every committee, the grumpy one, the one that is such a stickler for rules that it surpasses logic, the one who always talks first and has the last word, the one who doesn’t like anyone’s ideas but her own, the one who the entire world revolves around, the one in every church bible study that thinks it’s a personal counseling session, that one overly enthusiastic, volunteer at your child’s school who the school loves, but the other mothers all roll their eyes at because they know what she’s all about. Heaven forbid you give them a title of head volunteer, president of such and such, or leader, then you’re really in for it.

The problem though, is that they’re sneaky. They volunteer for things that others don’t want to do. The things we think to ourselves, “There’s no way I’m doing that, I’m too busy and I don’t want to take on that responsibility.” And then… we find ourselves stuck with a highly annoying know-it-all that succeeds in being the thorn in everyone’s side.

You know the one?

What is it that we are lacking as women, that some of us need to have this control and this hunger for attention? This need to irritate everyone around us, even if it causes us give the rest of the female population a bad name? How is it that some of us are so focused on what we are doing that we don’t even notice how our behavior and attitude affects the people around us?

How it alienates us from each other?

We all like to have control over our lives. But when that need for control takes over your personality and turns you into a self-serving, unpleasant person, it spreads like a dark cloud around everyone you’re with. Something that those personality types don’t seem to understand…most people don’t like people like that. Sad really. Because their behavior just further alienates them from the very people from whom they are seeking attention.

What do we do about that?

Well, I certainly don’t have all the answers, or even a few, but I can tell you what I did.

I woke up this morning. Did my morning routine and went straight to the kitchen and started baking. Some of my best work comes when I’m frustrated or annoyed and need to let off a little steam.

I’d probably be much thinner and in better shape if I liked to work off steam by running 10 miles or getting in touch with my inner calm self by doing 2 hours of yoga…but such is life. I prefer baking, cleaning, and gardening when I have a thorn in my side.

1 Cup Almond Milk,warmed but not hot to the touch

Preheat oven to 35o degrees. Cream butter and sugar in an electric mixer on high until thoroughly combined and fluffy. Warm the almond milk lightly, not hot and add yeast. Stir and let rest while you’re measuring the flours, etc. The yeast/milk is ready when it is bubbly on top. About 5 minutes or so.

Measure the sorghum flour, almond flour, potato starch, tapioca flour, xanthan gum and salt in a medium bowl and whisk together. Set aside.

To the creamed mixture, add the eggs, oil, and vanilla. Mix thoroughly, scraping down the sides once or twice. Add milk/yeast mixture. Mix on medium speed until combined. 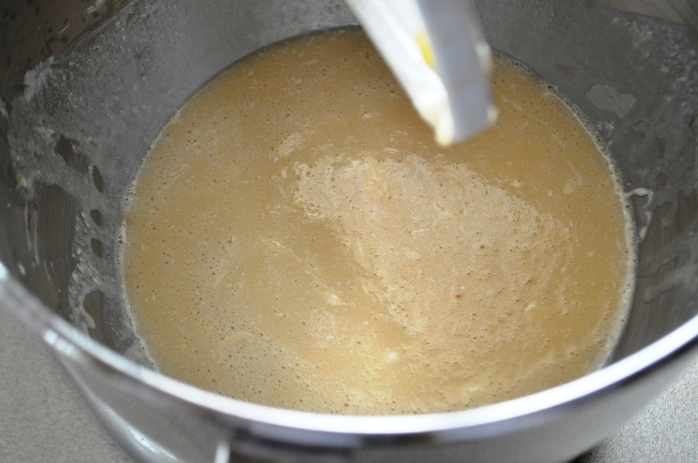 With the mixer on low, slowly add the flour and scrape down bowl. Mix on high until thoroughly combined (about 1-2 minutes). Dough will be sticky.

Next, flour a piece of parchment paper and scoop dough out onto paper. Flour the top of the dough and pat down. Flour a rolling-pin and roll the dough into a 24×15 oblong “ish” form.

For the filling, place the butter in a small dish and stir until softened enough to spread with the back of a spoon. Spread the butter carefully over the entire surface of the dough.

Sprinkle the apples as evenly as possible over the butter. Crumble the brown sugar over the apples evenly and sprinkle with cinnamon.

Carefully slice the dough into 4 rows lengthwise and 6 across. Spray a non-stick bread pan lightly with oil.

Stack the first row (lengthwise) on top of the second row. Stack the third row on top of the fourth row. Taking two slices at a time, hold the pan on end and begin stacking dough two pieces at a time until all of the dough is in the pan. 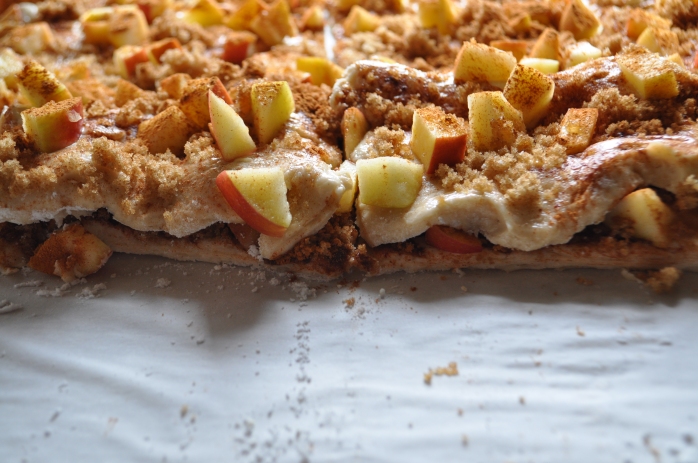 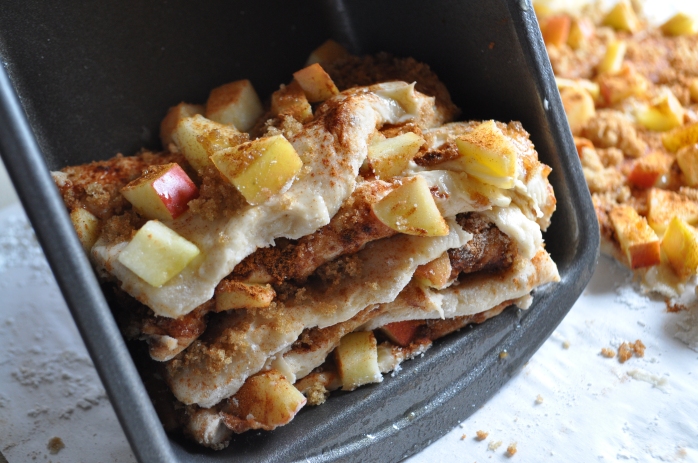 Spray a piece of plastic wrap with oil and cover the dough loosely. Allow to rest in a warm place for 30 minutes. Then remove plastic and bake in a preheated oven for 40 minutes. (I use convection.)

While the bread is resting, prepare the frosting. 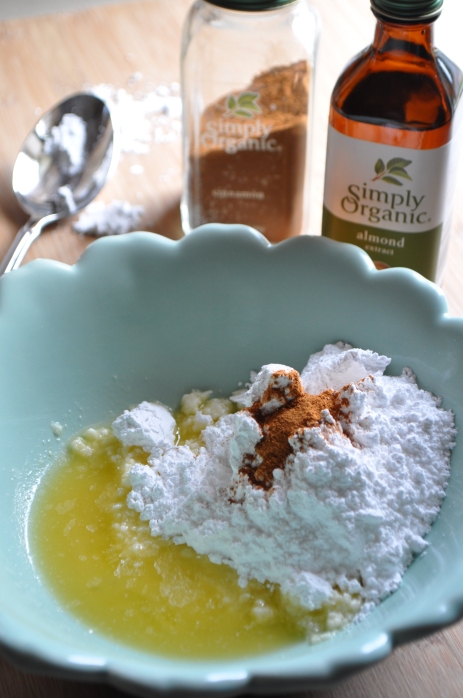 Melt butter in a small bowl, add sugar, almond extract, and cinnamon. Whisk with a tiny whisk or fork until combined. Add almond milk a teaspoon at a time until it reaches drizzling consistency. But not too thin!

Remove bread from oven (you can even do a happy dance like I did, because I was so thrilled it turned out), allow to rest for 5 minutes. Slide a knife around the edges and carefully remove from pan onto a plate or board.

Drizzle with frosting and serve. Can be served warm (unbelievable) or at room temperature (still unbelievable). 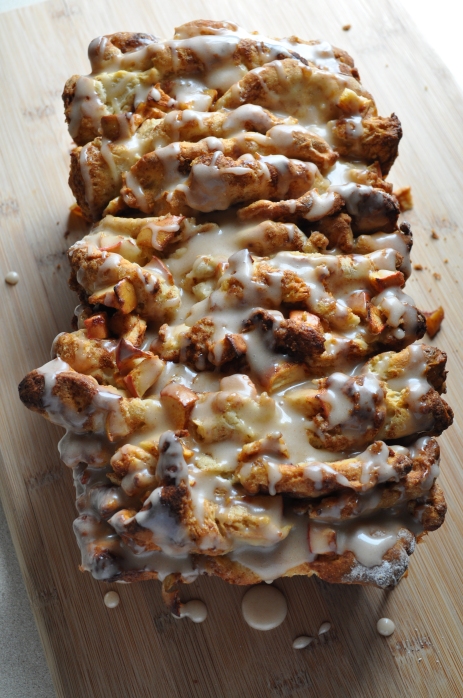 22 Comments on “Women, Power, & A Breakfast That’ll Knock Your Socks Off”