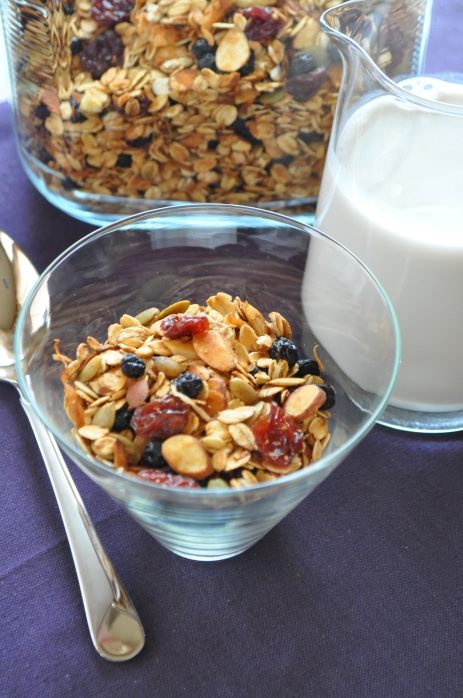 I’m not a big breakfast person. I like breakfast, but I would rather eat leftovers from the night before than eggs, cereal, or yogurt. However, I do enjoy granola. It’s pretty versatile. I sprinkle a little on yogurt for an afternoon snack, have some with almond milk in the morning occasionally, and it’s even good sprinkled on coconut milk ice cream for a nice evening dessert.

And it’s easy. So easy to make your own! It’s also less expensive and healthier…if you’re into all that health stuff. I like to think I’m into it, but really, I only like to pay attention to what’s in my food and where it comes from, not necessarily the calorie or fat content. I can tell you though, that this granola is much, much, lower in sugar and higher in protein than many I have seen in the “health” food isles of local stores.

I’ll give you a nutritional run down, here’s the healthy “stuff “:

Oats – Consuming 3 grams of soluble oat fiber per day (about 1 bowl) has been shown to lower total cholesterol by 8-23%, they have a unique antioxidant that reduces the risk of cardiovascular disease, and oats have significant cardiovascular benefits particularly for women who are postmenopausal.

Almonds – Almonds lower LDL cholesterol and reduce the risk of heart disease, they lessen after meal surges in blood sugar – protecting against diabetes and cardiovascular disease, the flavonoids in almond skin team up with the vitamin E in their meat to more than double the antioxidant punch either one delivers when eaten separately.

Pumpkin Seeds – Pumpkin seeds are basically a miracle seed. They provide prostate protection, improve bladder function, they contain L-tryptophan, a compound naturally effective against depression, they are high in zinc and are a natural protector against osteoporosis, they are a natural anti-inflammatory, they prevent kidney stone formation, they are used in many cultures as a natural treatment for tapeworms and other parasites, 1/2 cup of pumpkin seeds contain 92% of your daily value of magnesium a mineral in which most Americans are deficient, they lower cholesterol, and the same phytosterols that lower cholesterol, also protect against many cancers.

Coconut – Coconut is high in protein, it is a healthy fat, 1 cup of coconut provides 29% of your daily fiber, it improves consistency of blood sugar and decreases fluctuations that contribute to glycemic disorders such as diabetes (unsweetened coconut), it has 11% of your daily iron and 8% of your daily potassium.

Agave Nectar – One of the most health-promoting properties of agave nectar is its favorable glycemic profile. Its sweetness comes primarily from a complex form of fructose called inulin. Fructose is the sugar that occurs naturally in fruits and vegetables. The carbohydrate in agave nectar has a low glycemic index, which provides sweetness without the unpleasant “sugar rush” and unhealthful blood sugar spike caused by many other sugars, the Aztecs used a mixture of agave nectar and salt as a dressing for wounds and a balm for skin infections, agave nectar applied to the skin has been found effective against pyogenic (pus producing) bacteria such as Staph aureus, and adding salt to the nectar has been found to further boost its anti-microbial property, agave nectar has also been proven effective against intestinal bacteria.

Sea Salt – Sea salt is alkalizing to the body, as it has not been exposed to high heat and stripped of its minerals, nor does it have any harmful man-made ingredients added to it, it helps the body to create digestive juices so that the foods you eat are digested faster, and it helps to prevent buildup in the digestive tract, which eventually can lead to constipation and weight gain, sea salt is effective in reducing inflammation in the respiratory system, some say that sprinkling sea salt on the tongue after drinking a glass of water is just as effective as using an inhaler, it can help to reduce the need for insulin by helping to maintain proper sugar levels in the body, and sea salt also has shown to be effective in treating various types of depression, the salt helps to preserve two essential hormones in the body that help you to better deal with stress, these hormones are serotonin and melatonin, which help you to feel good, and relax and sleep better at night.

Cinnamon – Cinnamon has a regulatory effect on blood sugar, it has shown an amazing ability to stop medication resistant yeast infections, cinnamon reduces the proliferation of leukemia and lymphoma cancer cells, it has an anti-clotting effect on the blood, In a study at Copenhagen University, patients given half a teaspoon of cinnamon powder combined with one tablespoon of honey every morning before breakfast had significant relief in arthritis pain after one week and could walk without pain within one month, it is a natural food preservative, smelling cinnamon boosts cognitive function and memory, and it is also a source of manganese, fiber, iron, and calcium.

Olive Oil – Olive oil is a natural juice which preserves the taste, aroma, vitamins and properties of the olive fruit, it is the only vegetable oil that can be consumed as it is – freshly pressed from the fruit, it has a high content of monounsaturated fatty acids and antioxidative substances, studies have shown that olive oil offers protection against heart disease by controlling LDL cholesterol levels while raising HDL levels, no other naturally produced oil has as large an amount of monounsaturated as olive oil, mainly oleic acid.

Dried Cherries – Cherries improve sleep, lower LDL cholesterol, the flavonoids in cherries also promote gastrointestinal health and have been shown to reduce certain tumors in the large bowels of rats.

Dried Blueberries – Blueberries are high in vitamins B1 B2 and B3, 1/4 cup contains 30% of your daily vitamin C, they are also high in calcium, potassium, iron, and phosphorus.

In a large bowl add the oats, almonds, seeds, coconut, nectar, sea salt, cinnamon, and olive oil. Toss with two spoons until thoroughly combined. Spray a large roasting pan with oil or line a deep baking sheet with parchment and add the oat mixture spreading out evenly. Bake for 40 minutes, tossing every 10 minutes until oat mixture is golden and lightly crisp.

Remove from oven, pour into a large bowl. Add the dried fruit and toss with two spoons to disperse fruit evenly. Pour back onto the roasting pan or baking sheet to cool. Once it has completely cooled, store in an airtight container. It will keep for about 30 days if it lasts that long! 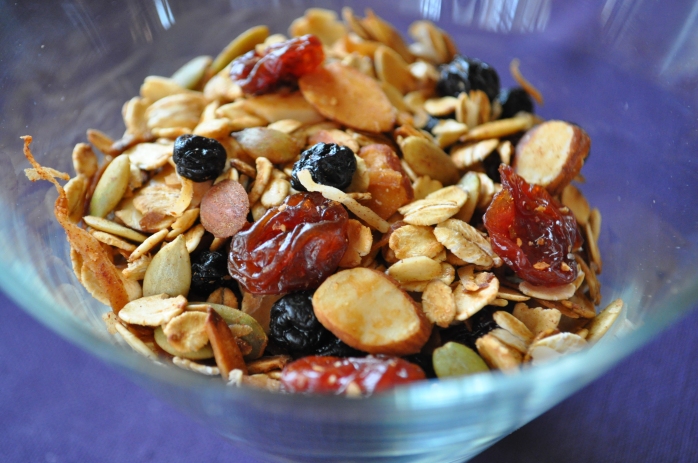 ← Berry Scones and A Side Of Fat Thighs
Granola Bark →