The maple sugaring season in New Hampshire is up and running!

Why is this so exciting?

Because all over New Hampshire there are little sugar shacks that produce the best tasting maple syrup that has ever passed your lips.

You can only get it fresh between the months of February and April, so my suggestion is, that although the syrup is wonderful all year, there’s nothing quite like tasting it warm right when they’re making it…so get out there and start sampling!

We visited two maple syrup producers today but there are a total of eight in our county and over 110 state wide. 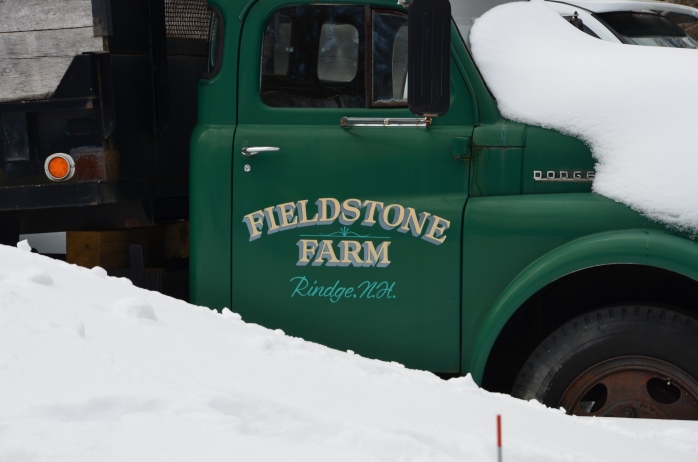 Typically they are just little houses or “sugar shacks”.

Fieldstone Farm harvests the sap from several different locations so we couldn’t see what a tapped tree looks like. But on our way to another town we ran across a small area that was being tapped on someone else’s property. I’ll show you those pictures after we tour the farm. 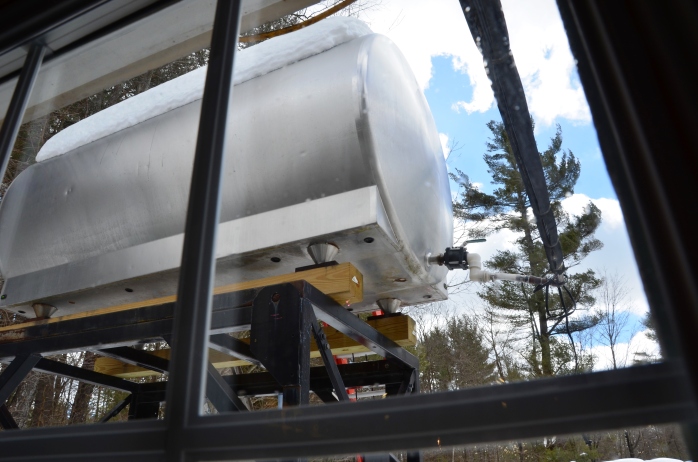 This is where the sap starts its journey into the sugar shack. It will be heated to evaporate the water, then boiled, then cooled before bottling…at the beginning of the process the sap only has about 3% sugars and after it has been heated and the water has evaporated, it will raise to about 10%. You can go here to learn all about the process of making maple syrup.

The measurements are so they can tell how much sap is left in the outside tank.

This is also the sampling room. Little cups of warmed maple syrup…let me tell you, it was delightful. It almost tasted buttery; it was so smooth and rich. Then they brought out the Maple Cream. I had never even heard of such of thing but I’m going to tell you right now, if you have the opportunity to purchase some, do it.

Unbelievable. Think of whipped honey but in the form of maple syrup and much thicker and richer. It’s still 100% maple syrup but they heat it to a high temperature and then have to cool it to a certain temperature. It’s a two day process just to make one pot the size of a large stock pot. It is so good you could easily eat it by the spoonful.

This is the owner, Dana Ryll, (below left) chatting with friends and customers. I feel like we live in such a remote area compared to where we used to live in the city, so I’m always so surprised to see so many people out and about here. There were tons of people coming in and out. Clearly, the locals and even not so local know exactly where to get their maple syrup and maple cream.

Remember how I’ve been telling you how incredibly friendly people are in New Hampshire? We hadn’t thought to bring a checkbook and had only come with a debit card. We had over $80 in purchases set aside on the counter and Dana’s exact words were, “Don’t worry about it, just mail me a check! We do it all the time, I trust you.” What on earth? When was the last time you heard that from someone who was selling you something? Even though we appreciated his very kind gesture, Tony ran to get cash. Such friendly people. We are enormously blessed to live in this part of the country. 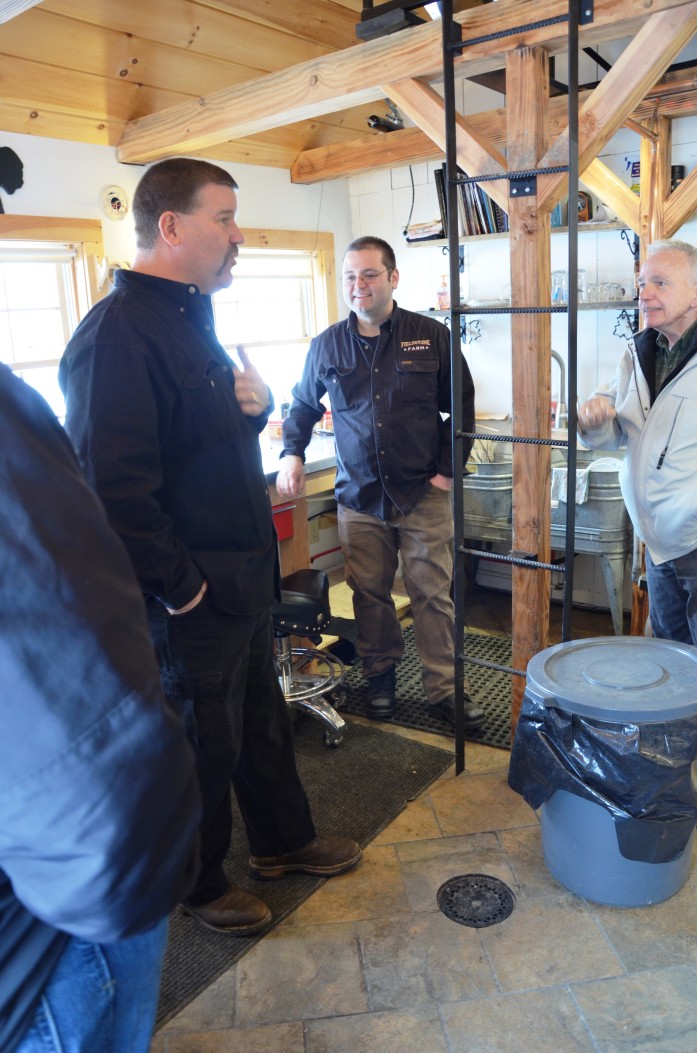 This sweet kiddo is Austin.

He helps during syrup season and they call him the “Sap Rat”. He’s proudly displaying their delicious syrup.

This is the boiling room.

The chimney in the back is where the wood smoke can escape and the steam from the boiling syrup goes right up to the ceiling where there are panels they open so the steam can make its way outside. It’s still winter in New Hampshire (35 and windy today) and this was my favorite room because it was so warm and moist!

While Tony ran to get cash I headed outside to see Abe the  Buffalo, and his daughter Maybelle. I was chatting and forgot to get a shot of Maybelle. Maybelle is a Beefalo and she was gorgeous. Looked mostly like a cow but had a bit of a buffalo hump and long hair along her neck and her face was gorgeous. When we head back there for more syrup I’ll be sure to get a picture for you.

This is Harry and his friend whose name I didn’t catch. Harry was adorable and liked to have all kinds of attention. At one point he even had a good taste of my camera strap and my scarf.  The owner’s wife basically rescued them from a goat milk farmer. Evidently since the males don’t produce milk they are…disposed of…when they’re born. I told her I was lucky I didn’t go with her because I’d probably have ended up coming home with way more than two! Wonder what Tony would say when he arrived from out of town to a backyard full of male baby goats? 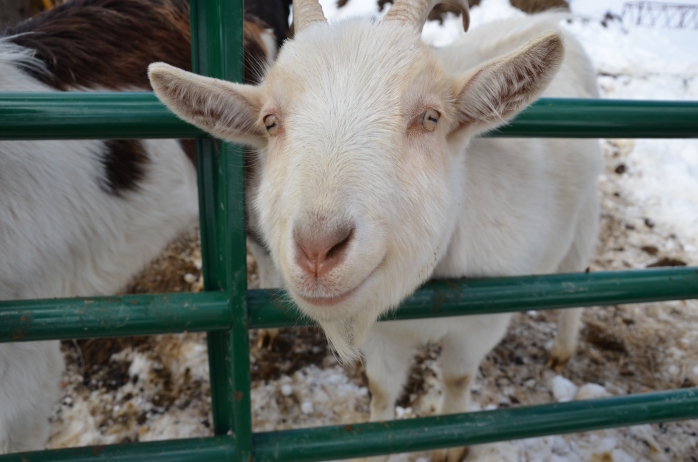 Their farm is absolutely beautiful. I need to learn to be more focused when I’m out and about with my camera. I enjoyed the opportunity for social time and neglected to take a few shots of their land. Amazing scenery.

So many areas in New England are straight out of a Martha Stewart magazine. Exactly like you imagine. Do you know what I mean? As you drive down the treed roads, everywhere you look you see the quintessential New England homes as if they are right out of a New England handbook. Gorgeous wreaths hanging on doors, a wisp of smoke coming out of the chimneys, stacks of firewood off to the side. Places where you wear wool sweaters and adorable boots and cart shiny pails of warm milk and fresh eggs into the house. Places where homemade syrup fills the air and people welcome you right into their farms and homes with open arms. 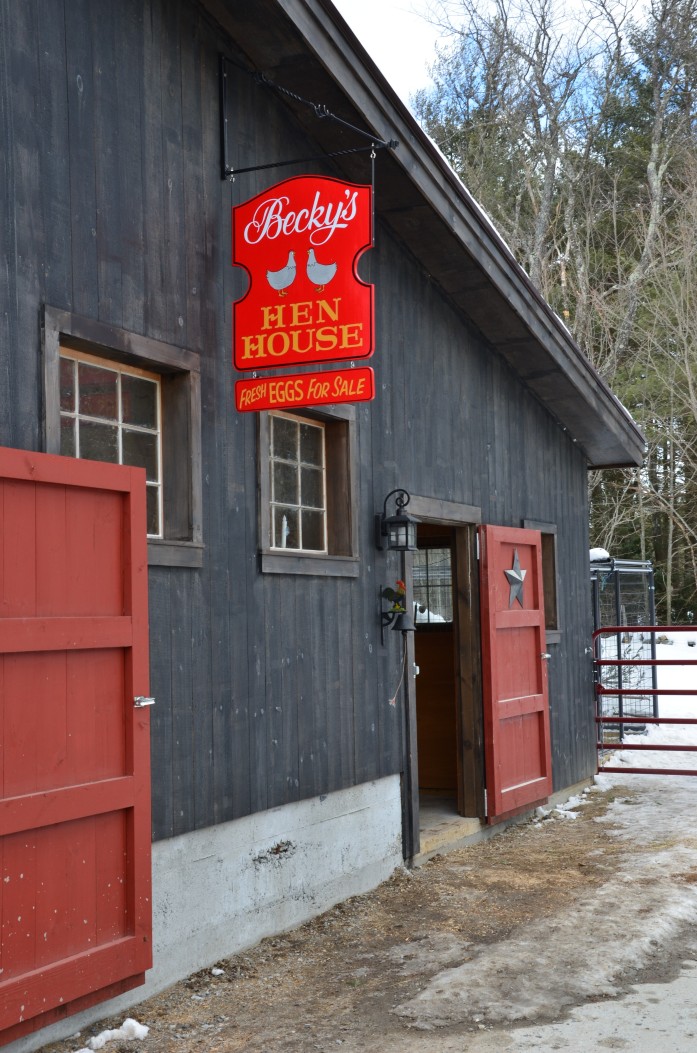 You can order their syrup and maple cream and learn more about Fieldstone Farm and Sugarhouse here.

We moved on from Fieldstone Farm and headed north to Boutwell’s Sugar House in Jaffrey.

A much smaller operation, tiny in fact, but don’t let that fool you or stop you from visiting. They too are producing a very flavorful and delicious maple syrup. We purchased their medium amber syrup and snacked on samples of maple sugar candy. 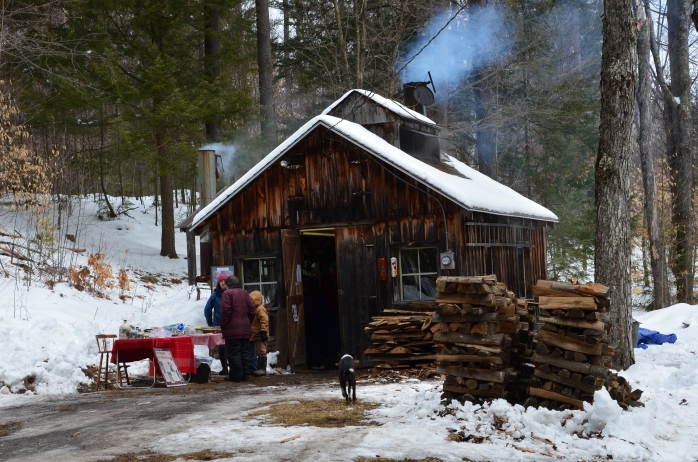 I threw a stick for this sweet girl while Tony chatted with the owners. You know I have a soft spot for pups!

Who could ignore those pleading eyes? 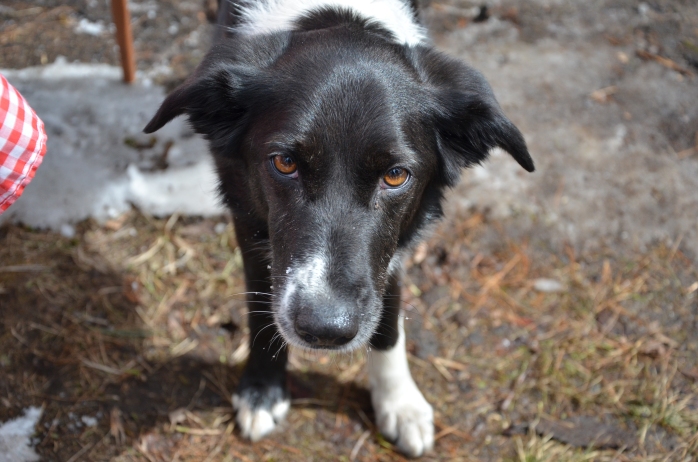 From here we headed toward Keene to check out the local farmer’s market. We kept noticing blue tubing on some of the trees on people’s property along the way. We finally realized they were tapping the trees for sap to make maple syrup. Duh! I had Tony turn the car around so I could get a few pictures for you.

Not at all what I had expected. They are just tiny little taps! They’re all hooked together and converge into one long line that go directly into a sap tank. Probably just enough for the homeowner and their extended families to enjoy for the year.

Right there in the middle is where they all converge.

And here is where they drain into the sap tank. It has to freeze at night and get up around 35 degrees during the day for the sap to flow. 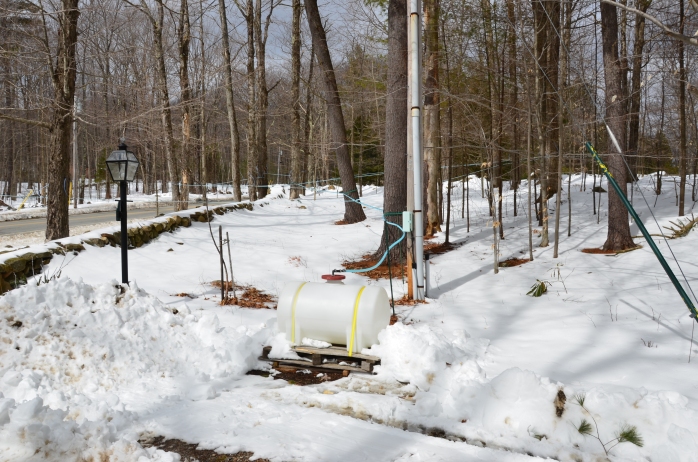 I’m pretty sure we don’t have any maple trees on our property, but we haven’t been able to do much exploring with all the snow. If we do, I’ll certainly be looking forward to some homemade maple syrup!

From there we got back on the road to Keene and headed to the farmer’s market.

The winter farmer’s market is pretty tiny but we still managed to leave with  four jars of organic preserves and one jar of organic chile pepper mustard from Cheshire Garden  for the BLT’s with avocado that we’ve been loving lately.

We have been told the farmer’s market grows dramatically when the weather warms up. Can’t wait to see what all of the local farmers bring to sell!

From there we headed to the Elm City Brewing Company for lunch. (photo courtesy of Yelp) 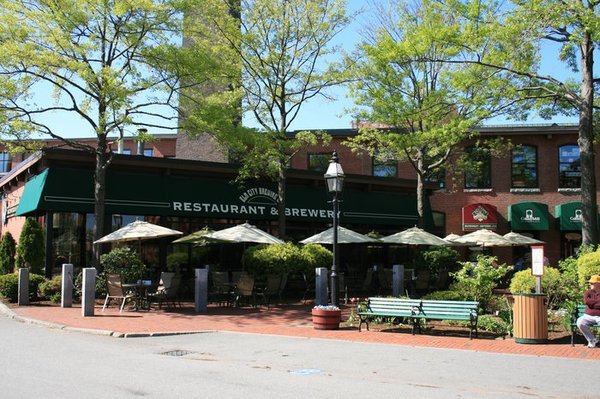 We feasted on gluten free burgers and fries and I was shocked and pleased to hear they even had three gluten free beer choices for me.

We had a fantastic day and Tony and I both agree that New Hampshire Maple Weekend gets two thumbs up!