Posted on December 7, 2011 by glutenfreezen

The house is finally done! Well, when I say done, I really mean “done”.  There’s still window treatments to be hung, caulking to do, paint touch ups, decorating, etc. Most of the major things we set out to do have been accomplished. (More pictures to come soon…) I think we might have been a little crazy to do the entire house (minus our unfinished basement) at once. It was a whirlwind experience to say the least, and quite frankly, I’m shocked that it went as well as it did.

We still have a “to do” list for next spring…maybe finish the basement, look into replacing counter tops, and then the outside of the house needs to be painted. The list never really ends, does it?  We are very pleased with the finished product and now that the major stuff is done, I’m thankful that we decided to do it all at once.

We love the new appliances! What a difference a modern appliance makes. Ha! Our old oven and dishwasher were 11 years old and the fridge was 16 years old. They were in for several days before I even had time to sit down and figure out how to work the oven! We switched from electric to gas/convection and our new oven has a lot of buttons and a 37 page manual. Yikes. I read through it twice and honestly, there were so many directions for pre-settings and default settings and few other settings, that I had no idea what they even meant.  I took the first basic three or four instructions and just went with it. Turns out it’s much more straight forward than the manual would have you think. Which believe me, after putting in 15 hour days in this house for the last 4 weeks, was a huge relief.

There is something that cracks me up every time I look at all those buttons on the stove though…there’s a Chicken Nugget and a Pizza setting! Preset temperature and everything so all a person needs to do is put a frozen pizza or frozen chicken nuggets in the oven and push one button. I suppose some people might think this is clever, but I have to wonder what it says about America’s eating habits and the time spent on family meals. How about a Fresh Baked Bread button, or a Roasted Turkey button, or a Vegetable Quiche button?

My Maiden Voyage consisted of a stuffed, roasted chicken, with roasted vegetables. I finally figured out the roast setting and it worked great! Lightly crispy on the outside, juicy and tender on the inside. The vegetables were a little al dente, but that was due to the fact that I was rushing and cut them too large for the size and cooking time of the bird. Had they been with a turkey, it would have been fine.

Vegetables and Potatoes of your choice (I used celery, mushrooms, carrots, onions, and red potatoes)

Rinse and thoroughly dry the chicken and place in a roasting pan. Follow the directions for the gluten-free stuffing, minus the baking and stuff the bird. I stuff both ends and sometimes separate a little of the breast skin so I can push some stuffing into there as well. I love stuffing, so I try to get as much of it in the bird as possible!

Cut the vegetables and place around the bird in the roasting pan. Drizzle with a little olive oil and pour about 1 cup of chicken broth over the veggies.

In a small bowl, place about 2 Tablespoons of dairy free butter, 1 Tablespoon of chopped garlic, and 2 Tablespoons of chopped, fresh herbs. Season with a generous amount of sea salt and pepper and mix with a fork until it is completely incorporated and smooth. Spread over your dried bird. I had a little extra so I dolloped a bit on the veggies also.

Place in a hot oven, about 325 degrees, and roast according to your oven and weight of your bird. Mine took about 1 hour and 45 minutes.

Meanwhile, place the chicken innards in a medium sauce pan and cover with chicken broth. Add a couple of chopped celery tops and some fresh herbs. Simmer for 1 hour. I use this broth for the gravy. You can chop up the soft innards for “giblet gravy”  (my favorite!) or strain them out and just use the broth if having chicken liver in your gravy freaks you out.

When the chicken is done, remove it from the roasting pan onto a cutting board and cover with foil to rest. Remove the veggies to a serving platter and cover.

Pour about 1/2 cup of chicken broth into a glass and add 2 Tablespoons of potato starch. Whisk with a fork. When the broth begins to boil, slowly add the starch to thicken the gravy. You may need to add more to get it to your desired thickness. You can also use corn starch or gluten-free flour. I prefer the potato starch because I feel that corn starch gives it too much of a gelatinous texture and flour gives it a grainy texture that is difficult to cook out. When I make a gravy with a roux base, I use gluten-free flour and that works well. But for this gravy, potato starch works the best.

A terrible picture, but dinner was fabulous! 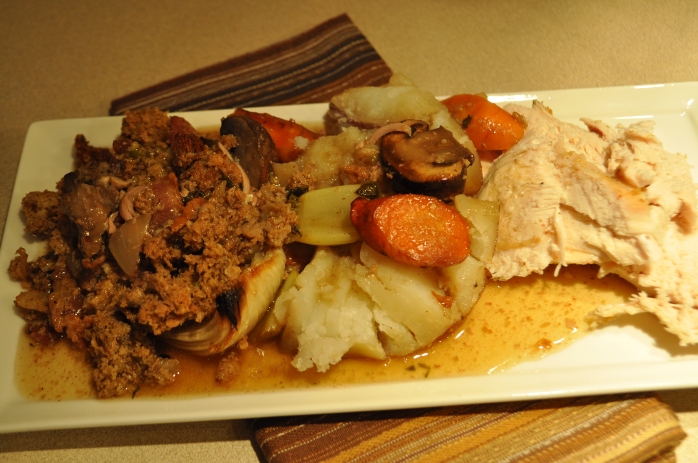 ← Making Do
Pineapple Pick Me Up →

3 Comments on “The Maiden Voyage…”